On "FOX & friends" this morning, conservative radio host Rush Limbaugh took aim at Democrats for being "propelled" by their hatred of President Trump. He said:

Limbaugh also insisted that, in the face of a "roaring" economy that added 266,000 jobs in November and saw unemployment decrease and wages increase, impeaching our Commander-in-Chief has become the Left's primary election strategy:

"If you had to give President Trump a legacy right now, do you know what it would be? Peace and prosperity. ... It's, once again, going to illustrate the utter futility that the Democrat party faces in trying to get rid of him. ... They don't have anything to run on. They literally have nothing. They have sacrificed every bit of concern for the American people."

Here are the impeachment-related stories Grassfire is tracking for Friday, December 6:

Tucker Carlson: Pelosi trapped by lunatics to her left, puts brave face on a doomed mission

Pelosi Jamming Through Impeachment with Same Partisan Power Tactics that Passed Obamacare, Then Lost the House

Pelosi: ‘Civilization as we Know it Today Is at Stake in the Next Election’

Here are the impeachment-related stories Grassfire is tracking for Thursday, December 5:

Trump on impeachment: It's a big, fat hoax

Pelosi snaps at reporter after question about hating Trump: 'Don't mess with me'

Pelosi's impeachment politics 'will blow up in her face' (VIDEO)

Ken Starr: Pelosi engaging in 'abuse of power,' Senate may have to dismiss case

The following content is from an email Grassfire received from President Trump's re-election campaign on Wednesday, December 4, at 6:58 p.m. ET:

Jerry Nadler has taken over this Impeachment Hearing Scam and has turned it into even more of a circus than it already was.

Here are the impeachment-related stories Grassfire is tracking for Wednesday, December 4: 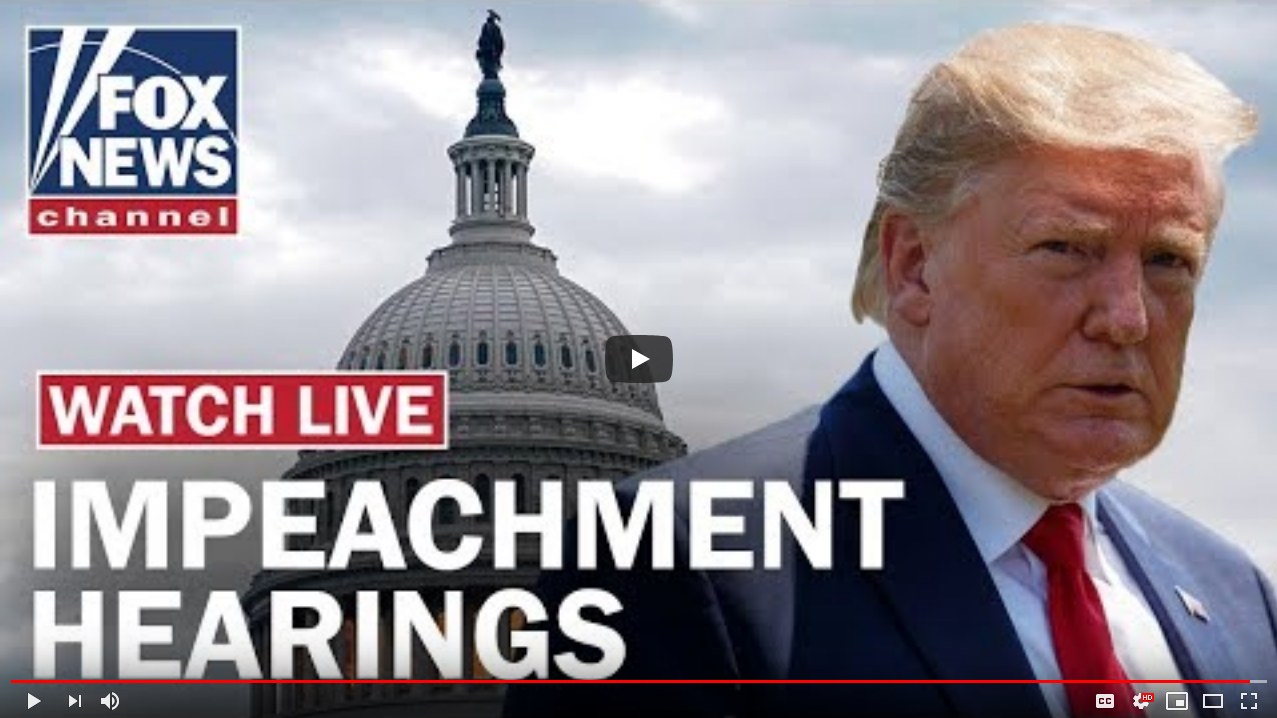 GOP Prebuttal: REPORT OF EVIDENCE IN THE DEMOCRATS' IMPEACHMENT INQUIRY

Newt Gingrich: Plot against president is real -- And bigger than many think

Of founders and findings: What to watch on impeachment

Dems' 'ridiculous sham show' hearings will 'boomerang' against them in 2020

Gingrich: "Plot against president is real"

Over the weekend, FOX News published an alarming opinion piece by former Speaker of the House Newt Gingrich. The title instantly grabbed our attention:

Plot against president is real -- And bigger than many think

House Speaker Nancy Pelosi (D-CA) and the Democrats' tunnel-vision focus on impeaching President Trump puts all of us, as Americans, at risk. ...

As this plot against Trump has continued, the American system has been bypassed, ignored, or misused to the point where it has been put in jeopardy. Democrats, political operatives, American intelligence officials and the media have been forcing a manufactured narrative on the American people. ...

Make no mistake: This is not politics as usual. It’s a concerted effort by one political party, the Washington bureaucracy, and the media to overrule the American people.

Here are the impeachment-related stories Grassfire is tracking for Tuesday, December 3:

Public Opinion Isn't Moving On Impeachment, And Democrats Are Running Out Of Time

The House Judiciary Committee is less than 24 hours away from continuing the ridiculous and baseless impeachment-inquiry Witch Hunt against President Trump. But Grassfire is giving you the opportunity to fight back TODAY by instantly faxing EVERY MEMBER of the committee. Click here or on the image to learn how:

IMPEACH UPDATE: Dems at it again!

The Democrats are at it again. Tomorrow (Wednesday) morning at 10:00 a.m. ET in the Longworth House Office Building in Washington, D.C., the House Judiciary Committee, led by Chairman Jerry Nadler (D-NY) will continue the impeachment-inquiry Witch Hunt against President Trump.

Obviously, Nadler and his fellow Democrats didn't learn anything from watching the "Schiff Sham" play out over the two weeks before Thanksgiving. Now, the House Judiciary Committee is wishing America "Merry Christmas" by trying to tear the nation apart with a new round of hearings.

Their LIES are killing America!

The Left's lies and attacks are threatening to destroy our nation!

That's why we launched the FIGHT THE COUP! campaign, with a fully-resourced website (I believe the best on the web) with the latest information and action items for patriotic Americans who are outraged by the impeachment/coup effort. We've already resourced HUNDREDS of key impeachment stories (go here for the TOP TEN STORIES from yesterday) and have the DEFINITIVE LIST of vulnerable Democrats and waffling Republicans.

So far, we've reached HUNDREDS OF THOUSANDS of citizens, but the next few weeks are critical and we must make up our MONTH-END BUDGETARY SHORTFALL BY THIS WEEKEND!

Here are the impeachment-related stories Grassfire is tracking for Tuesday, November 26:

Trump lashes out a "D.C. Wolves"

Schiff explains next steps in process

Did Dems FAIL in switch to "bribery" charge?

Here are the impeachment-related stories Grassfire is tracking for Monday, November 25:

What if I told you…

This is CNN: Trump a 'Destructive Cult' Leader Using 'Mind Control' on Supporters

Levin: Impeachment Not Whatever the House of Representatives Says -- 'That's a Lie' (VIDEO)

What's next in impeachment: Judiciary Committee up next

I guess President Trump had just had enough!

Yesterday morning, the President did something that we think may be unprecedented. ...

He called into FOX News' morning show, Fox & Friends, and stayed on for an entire hour! President Trump is amazing. He simply will not stop fighting the liberal media and the anti-Trump radicals in Congress. He puts everything on the line every day to defend our country and make America great again.

But the battle against the Pelosi-Schiff impeachment is getting tougher, and the next few weeks are critical. Which is why I'm asking for YOUR HELP today in a special way...

This morning, President Trump gave FOX & friends an unprecedented, call-in interview that lasted more than 53 minutes. Grassfire staff can't remember a similar event in all of television history. Click here or on the image below to watch the interview on Grassfire's "FIGHT THE COUP!" website: 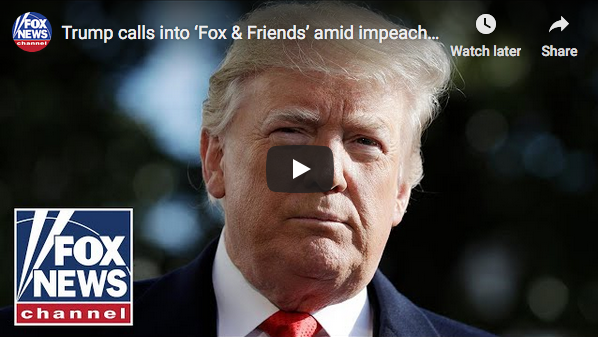 During his wide-ranging discussion with hosts Ainsley Earhardt, Steve Doocy and Brian Kilmeade, Mr. Trump discussed the ongoing impeachment-inquiry Witch Hunt, the 2020 presidential race, the pending USMCA trade deal before Congress and other topics. The President also responded to the second week of impeachment hearings, saying:

Here are the impeachment-related stories Grassfire is tracking for Friday, November 22:

Poll finds sharp swing in opposition to impeachment among independents

What's next in the House impeachment inquiry

The Senate Should Throw Out Impeachment Charges

Here are the impeachment-related stories Grassfire is tracking for Thursday, November 21:

GOP support for Trump shows no overt signs of cracking 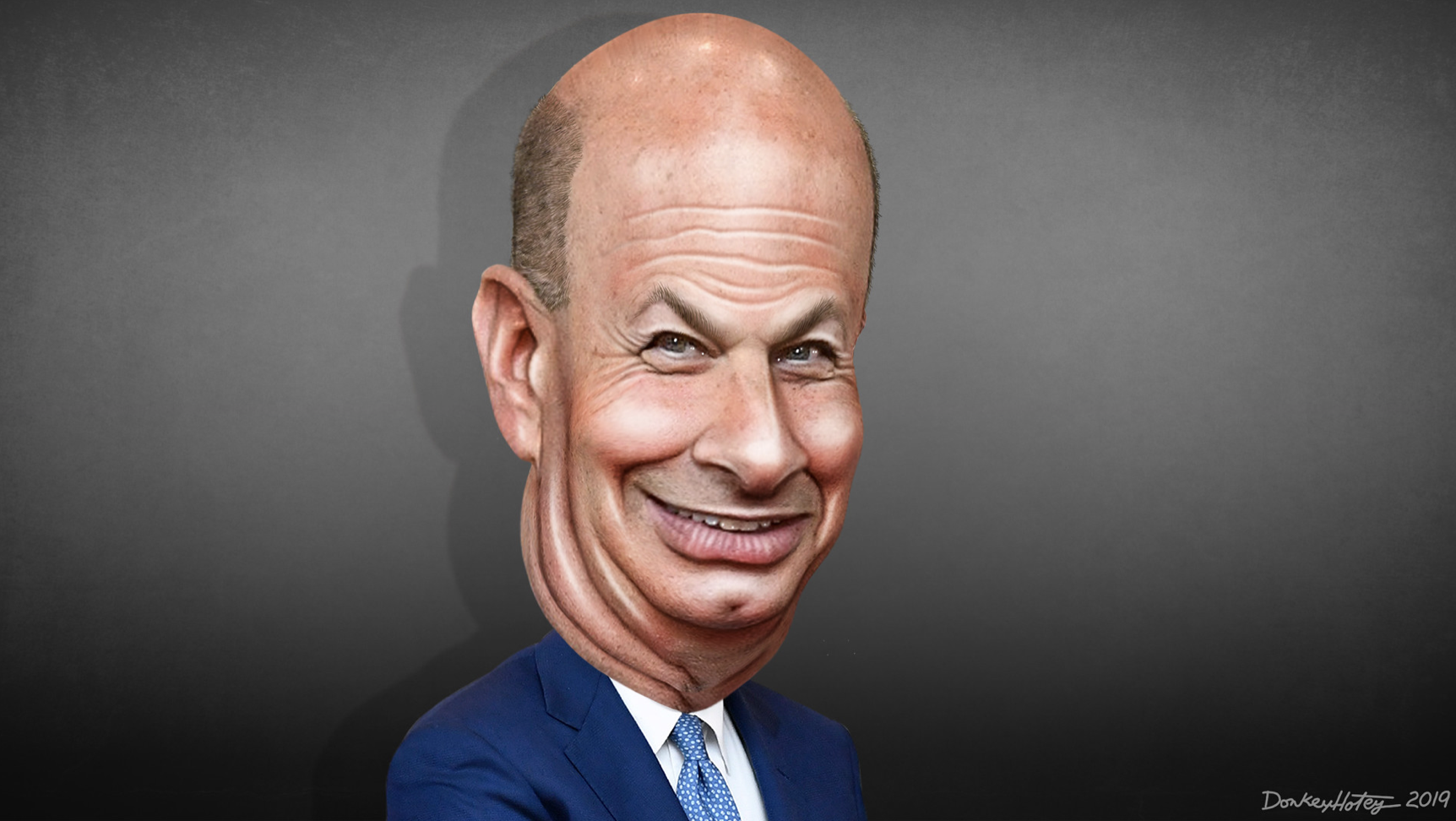 Here are the impeachment-related stories Grassfire is tracking for Wednesday, November 20:

EU Ambassador Claims 'Everyone Was in the Loop'

Ken Starr: GOP Senators Might Consider Having to 'Make a Trip' to the White House After Sondland's Testimony