With Senators back on Capitol Hill, attention has immediately returned to the pending impeachment trial of President Trump. This second baseless, partisan Witch Hunt against our Commander-in-Chief should be quickly dispatched in the Upper Chamber because 67 votes are needed to convict. With only 47 Democrats in the Senate, 20 Republican Senators would need to vote in favor of removing the President from office.

While that's not likely to happen, it's probably a good idea for grassroots patriots, like you, to make sure. That's why Grassfire compiled a list of 16 Senate Republicans who might be "waffling" and three key Democrats who could vote AGAINST impeachment.

Click here or on the banner below to call on Senators to stand with President Trump and against the radical Democrats' impeachment Witch Hunt:

Here are the impeachment-related stories Grassfire is tracking for Friday, January 3:

McConnell to speak on Senate floor amid impeachment stalemate

The Impeachment Article for Obstructing Congress Is Frivolous

Like Trump, Clinton also launched an Iraq airstrike as his impeachment inquiry was heating up

Dems Worry Impeachment Jury Duty Will Sideline Most of 2020 Field

Sen. Booker on impeachment: 'All of us should want the truth to come out'

Dem Rep: Pelosi Has 'Been Brilliant' During Impeachment

Dem Senators to vote AGAINST impeachment?

This morning, The Hill published a report about Senators "to watch" in the expected impeachment trial of President Trump. Three Democrat Senators mentioned in the article caught Grassfire's attention. Sens. Kyrsten Sinema (D-AZ), Doug Jones (D-AR) and Joe Manchin (D-WV) could break from their party and vote AGAINST impeachment.

Here are the impeachment-related stories Grassfire is tracking for Thursday, January 2:

Sen. Collins: ‘I Am Open to Witnesses’ in Senate Impeachment Trial

Trump campaign blows past 2020 Dems with latest fundraising haul, sitting on over $100M

As America heads into the most critical phase of the Nancy Pelosi-led impeachment Witch Hunt, Grassfire wants to give millions of grassroots patriots a voice in this fight. The coming showdown in the Senate that will launch one of the most important election years of our lifetimes. And we must do more to "FIGHT THE COUP!" against President Donald Trump.

Grassfire wants to EXPAND our nationwide efforts to reach and inform conservative voters in 2020. We MUST commit more resources to expanding our presence on social media to combat the lies. Our January goal is to DOUBLE our current reach to an amazing 800,000 citizens.

Trump: "They're not after me; they're after you" 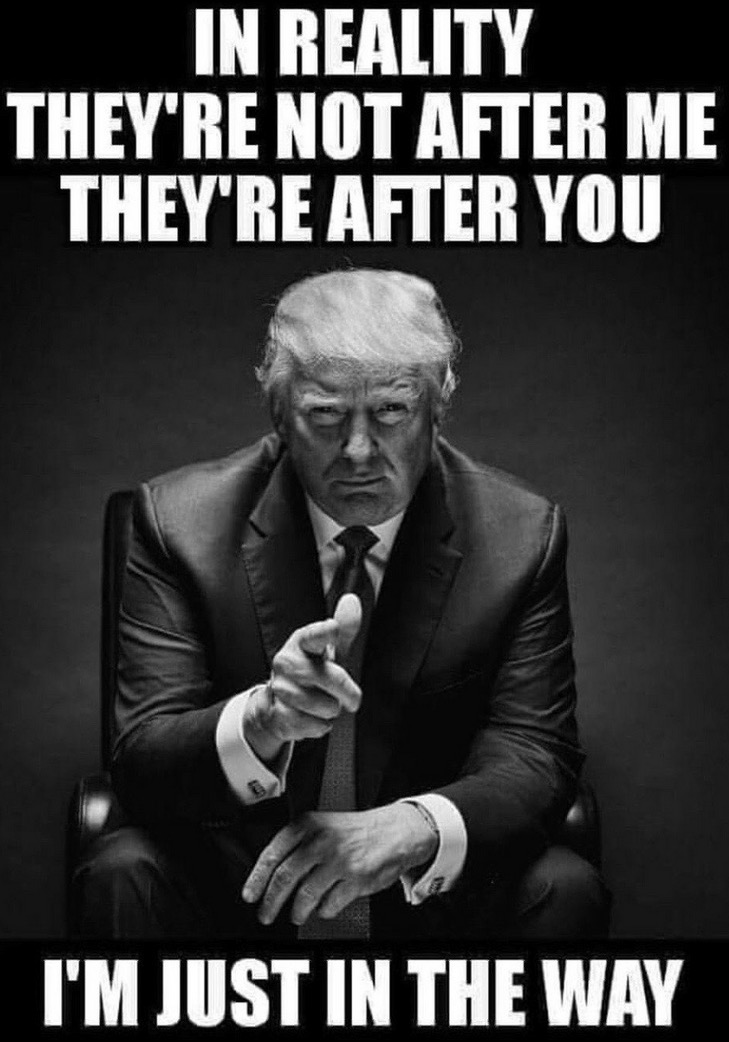 Shortly after last week's impeachment vote in the House of Representatives, President Trump defiantly tweeted a powerful, in-your-face meme that read: "In reality they're not after me; they're after you. I'm just in the way."

The radical Left will stop at nothing to bring down the President and the people who voted for them. Free speech, religious freedom and gun rights are front and center on the Democrats' attack agenda. They're working through their allies in the media to open our borders, allow abortion on demand, raise taxes, increase regulations and implement a host of other "big government" controls against the American people.

Grassfire is a small, but dedicated, grassroots organization that has been fighting for almost 20 years to give you a voice in defending America's founding principles of liberty and limited government. But we don't have any deep-pocketed donors, foundations or like-minded organizations to help finance our efforts. We only have friends like YOU to support us.

I need your help.

You see, we threw EVERYTHING into the battle to get the TRUTH to as many patriots as we could during the Nancy Pelosi-led impeachment Witch Hunt.
We even built an entirely new website (fightthecoup.us) that has grown into one of the best internet resources in this battle. We've logged hundreds of stories and resources as grassroots patriots fight the ongoing coup against President Trump. It was a risk, but we did it because we believe this battle is that critical.

And what friends like you have done is amazing...

One of the Senate's chief RINOs (Republicans in Name Only), Lisa Murkowski of Alaska, says she's "disturbed" by Majority Leader Mitch McConnell's (R-KY) hard, party-line approach to the Senate impeachment trial. As House Speaker Nancy Pelosi (D-CA) continues to hold the two articles of impeachment passed by the Democrat-led House last week for "leverage," McConnell has refused demands to vary from the 1999 trial rules used for President Bill Clinton.

But after House Republicans showed total unity in voting AGAINST the impeachment Witch Hunt against America's Commander-in-Chief, that might not be the case in the Senate. Some GOP lawmakers in the Upper Chamber are "waffling" on their support of President Trump. The Wall Street Journal reports:

(Murkowski's) comments mark a rare instance of dissent in a party that has been largely unified behind the president and the first sign of potential disharmony among Senate Republicans. Even a handful of GOP senators opposing procedures could force Mitch McConnell, the Senate majority leader, to change his strategy on impeachment, given the party’s thin majority of 53 seats in the chamber.

Here are the impeachment-related stories Grassfire is tracking for Tuesday, December 24:

Gingrich says Pelosi has no good way out of impeachment

Democrats test whether voters will shrug off impeachment

Roberts will tap his inner umpire in impeachment trial

This morning, Grassfire tallied the votes for our one-question "IMPEACH? QuickPoll. As expected, the results show, overwhelmingly, that Grassfire Nation is strongly opposed to removing President Trump from office.

We received nearly 10,000 votes over the past week and found that 98% of respondents REJECT impeaching America's Commander-in-Chief. Only 2% (less than 200 votes) supported impeachment.

Even though Grassfire's QuickPolls aren't scientific, we think the 98% to 2% vote is a strong indication of how grassroots conservatives feel about the Democrats' latest Witch Hunt against the President. That's why we plan to share these results with the offices of Senate Majority Leader Mitch McConnell (R-KY) and House Minority Leader Kevin McCarthy (R-CA) tomorrow, December 24.

What better "Christmas present" could Grassfire Nation deliver on behalf of President Trump than to urge GOP leaders to continue standing with our Commander-in-Chief against impeachment?

Here are the impeachment-related stories Grassfire is tracking for Monday, December 23:

McConnell not ruling out witnesses in impeachment trial

The Impulse Buy Impeachment: How The Democrats Yielded To The Holiday Frenzy Over Facts

Rep. Maxine Waters (D-CA): Trump ‘a Dishonorable Human Being Who Deserves to Be Impeached’

Inside impeachment: How an ‘urgent’ tip became ‘high crimes’

Sen. Lindsey Graham: Pelosi is taking a wrecking ball to the Constitution

Donald Trump’s ‘they’re after you’ tweet says it all: Goodwin

Here are the impeachment-related stories Grassfire is tracking for Friday, December 20:

Gingrich on impeachment: McConnell happy to let Dems 'be stupid'

Trump rails against delay in moving impeachment to Senate

Pelosi powerless to delay Trump impeachment trial if Senate does THIS

Tucker Carlson: What if Trump's impeachment is designed to distract you from what's really going on

Bernie Sanders: Americans Should Support Impeachment Because Trump Is a ‘Pathological Liar’

Geraldo: Pelosi betrayed by her own impeachment process

The content below is from an email sent to Grassfire staff by the office of Senate Majority Leader Mitch McConnell (R-KY) at 11:22 a.m. on Thursday, December 19:

‘This is by far the thinnest basis for any House-passed presidential impeachment in American history… The prosecutors are getting cold feet in front of the entire country and second-guessing whether they even want to go to trial… It will be an unprecedented constitutional crisis if the Senate agrees to set the bar this low forever.’

‘Last night House Democrats finally did what they decided to do long ago: They voted to impeach President Trump.

Here are the impeachment-related stories Grassfire is tracking for Thursday, December 19:

Trump becomes 3rd US president in history to be impeached (VIDEO)

Pelosi suggests she may wait to send impeachment articles to Senate: 'We'll make a decision ... as we go along'

Senate Can Acquit Even If House Withholds Articles of Impeachment

The content below is from an email sent to Grassfire staff by President Trump's re-election campaign on Thursday, December 19 at 10:12 a.m. ET: 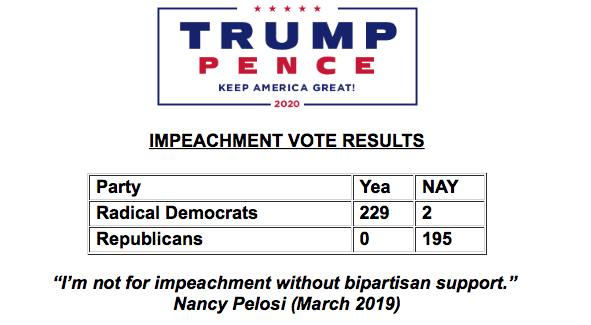 Nancy [Pelosi] is a liar and a fraud. Last night, we witnessed the most PARTISAN SCAM in American history and it resulted in the house officially IMPEACHING me.

The content below is from an email sent to Grassfire staff by the office of House Minority Leader Kevin McCarthy (R-CA) on Thursday, December 19 at 4:22 a.m. ET: 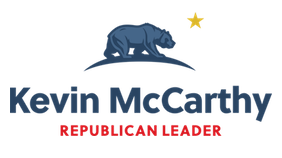 Minutes before the vote, I said something my Democrats hate to hear: Donald J. Trump is President.

There's still time for you to take action and FIGHT THE COUP! against President Trump. The House of Representatives still hasn't wrapped up their six hours of debate on the two articles of impeachment. Until they do, you have time to make an impact!

For just $20, you can instantly fax 49 House Democrats in contested or pro-Trump districts who could lose their seat by voting in favor of impeachment today. Click here or on the banner below now to immediately send your "I SAY NO ON IMPEACHMENT" faxes to those "vulnerable" Democrats, along with your Representative and Senators:

Here are the impeachment-related stories Grassfire is tracking for Wednesday, December 18:

What to watch as Trump impeachment moves to House floor

House to vote on articles of impeachment against President Trump: live updates

Trump on brink of impeachment as House readies historic vote

Tomi Lahren: Impeachment is only hope for Dems, they 'don't have a future to run on'

After a marathon session yesterday, the Democrat-led House Rules Committee approved in a 9-4, party-line vote how Representatives will consider the two articles of impeachment against President Trump. This morning, the House will convene and begin six hours of debate split evenly between both parties.

So expect to see PLENTY OF FIREWORKS today as Democrats continue attacking the President for "abuse of power" and "obstruction of Congress." Meanwhile, Republicans will make their case that the entire impeachment inquiry has been an unfair, politically motivated sham, hoax and Witch Hunt from the start.

The content below is from an email sent to Grassfire staff on Tuesday, December 17 at 8:42 p.m. ET by President Trump's re-election campaign:

Tomorrow, this Impeachment Scam is finally going to a vote in the House.

By proceeding with an invalid impeachment, Democrats are violating their oaths of office, breaking their allegiance to the Constitution, and declaring open war on American Democracy.

The content below is from an email sent to Grassfire staff by the office of Senate Majority Leader Mitch McConnell at 9:54 a.m. ET on Tuesday, December 17:

McConnell on Impeachment Procedures: The Senate’s Duty Is To Conduct a Trial, Not Re-Do House Democrats’ Homework For Them

‘Instead of the tried-and-true 1999 model — start the trial and then see how senators wish to proceed — the Democratic Leader wants to write completely new rules for President Trump… The Senate is meant to act as judge and jury. To hear a trial. Not to re-run the entire fact-finding investigation because angry partisans rushed sloppily through it.’

‘All signs seem to suggest that later this week, House Democrats are finally going to do what many of them have been foreshadowing for three years now and impeach President Trump.

‘It appears that the most rushed, least thorough, and most unfair impeachment inquiry in modern history is about to wind down after just 12 weeks and that its slapdash work product will be dumped on the Senate.