Grassfire has compiled a list of Republicans in the House and Senate who appear to be "waffling" on impeachment. Click here or on the banner below to call on GOP lawmakers to stand with President Trump and against the Democrats' impeachment-inquiry Witch Hunt: 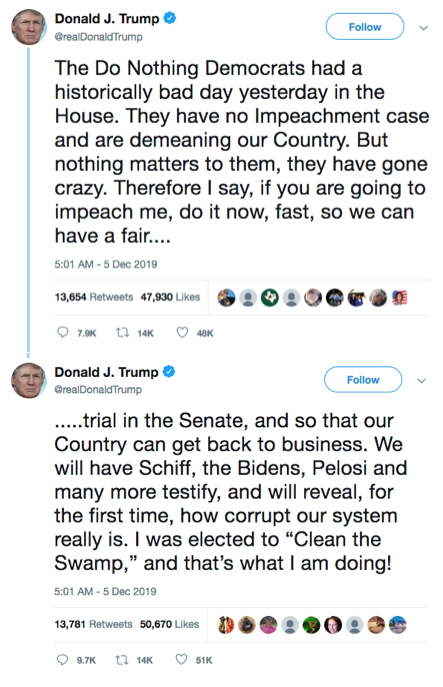 This morning, President Trump fired off a set of angry tweets about impeachment. He called on "crazy," "Do Nothing Democrats" to stop "demeaning our Country." He also demanded a quick resolution to the Left's threats:

"(I)f you are going to impeach me, do it now, fast, so we can have a fair ... trial in the Senate, and so that our Country can get back to business."

Yesterday, "three leading legal scholars" (according to AP) testified at a House Judiciary Committee hearing and encouraged Congress to impeach the President. Those three law professors were called by Democrats. The lone Republican witness allowed was identified by AP only as an "expert."

But Georgetown law professor Jonathan Turley actually has the most impressive resume of all four "leading legal scholars" who testified. After admitting that he voted for Hillary Clinton and Barack Obama, Turley stated:

"One can oppose President Trump's policies or actions but still conclude that the current legal case for impeachment is not just woefully inadequate, but in some respects, dangerous, as the basis for the impeachment of an American president."

+ + TAKE ACTION: Call On The GOP To Stay Unified!

Turley is absolutely correct! It's time for ANY AND ALL Republicans to stop waffling and defend America's Commander-in-Chief from this ridiculous and unconstitutional, impeachment-inquiry Witch Hunt. Click here or on the banner below to demand the GOP stand united with President Trump. Fax your Representative, your Senators and 14 key "wafflers" in the U.S. Senate for just $15:

Impeachment CANNOT happen without Republican support. Democrats simply don't have the numbers to pull off their illegal coup. That's why the GOP MUST remain unified.

Use Grassfire's unique FaxFire system to rush your personalized message to 14 Senate GOP "wafflers," your Representative, and your two Senators. That's up to 17 faxes for just $15!

Grassfire feels so strongly about the need for our team members to take action, that we've discounted the price on Levels 2 and 3 of the GOP Wafflers FaxFire. Act now to demand any weak-kneed, on-the-fence Republicans stand against Democrats and with our Commander-in-Chief! Click here to fax or to see a list of the key "Wafflers" in the House and Senate.

P.S. Again, the Democrats are going all in on impeachment. Republicans must take a stand NOW to end the sham. Go here to tell the GOP to defend President Trump against impeachment: