The battle lines have been drawn!

With today's House vote officially authorizing the impeachment-inquiry Witch Hunt, Democrats have drawn the battle lines that could make or break the Trump presidency.

Also at stake is "the Republic for which we stand."

This morning's resolution vote was almost entirely along party lines. All 194 GOP Representatives present and two Democrats voted against it. (Three Republicans didn't vote.) The remaining Democrats and one "Independent" cast 232 votes in favor of continuing to investigate, and possibly impeach, President Trump.

What happened on Capitol Hill today should serve as a bold warning to every conservative, grassroots patriot in America: Democrats are coming after the President and everything else that makes this country great. Free speech, religious freedom and gun rights are likely next up on their attack agenda, as they work to open our borders, allow abortion on demand, raise taxes, increase regulations and implement a host of other "big government" controls against the American people.

The Democrat-led House of Representatives basically declared war on Donald J. Trump today. The question that immediately needs to be asked and answered is: What are YOU going to do about it?

Grassfire has been one of the nation's leaders in exposing the Left's COUP attempts, which started with the Mueller investigation and have continued non-stop throughout the entire Trump presidency. In response to Democrat efforts to nullify the results of a free and fair election through a bogus impeachment process, rather than by winning an election, we're launching our FIGHT THE COUP! campaign next week. Here's what Grassfire's new, nationwide initiative will do:

Earlier this week, we asked for your help, {{recipient.first_name_or_friend}}, to raise $20,000 to launch this campaign. So far, we've raised less than 10% of the funding needed to maximize Grassfire's impact at this very critical time. That's why we're asking 100 team members to stand with us today and make a contribution of even $20 or $25.

Today, October 31, marks a critical end-of-month deadline that could determine the future success of our FIGHT THE COUP! campaign. Grassfire doesn't have ANY deep-pocketed donors, foundations or like-minded organizations that we can approach to help finance this kind of initiative. We only have friends like YOU. We count on thousands of fellow, grassroots, conservative patriots willing to stand side by side, shoulder to shoulder, and arm in arm to promote America's founding ideals of liberty and limited government.

If you're willing to help us launch our FIGHT THE COUP! campaign next week, so Grassfire can give YOU a voice in this fight to defend President Trump, please click here or on the banner below now: 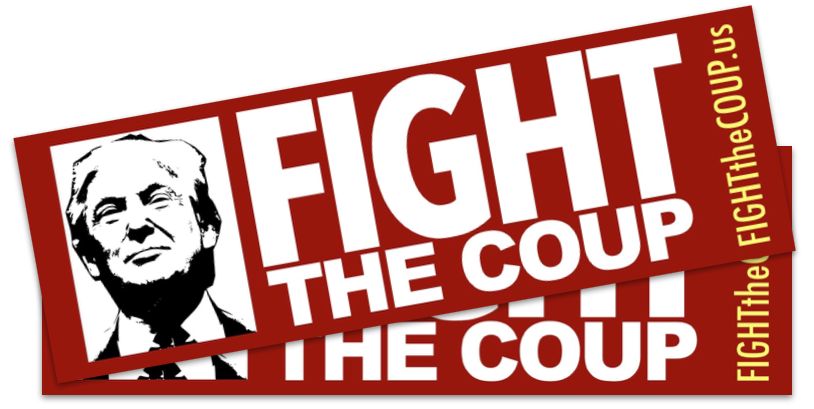 For your contribution of any amount to support the campaign launch, you'll receive two FIGHT THE COUP ReStickers. These state-of-the-art bumper stickers can be applied and re-applied to virtually any smooth surface. Post them on your car, truck or van to share a pro-Trump, FIGHT THE COUP message with your entire community. Go here.

For contributions of $35 or more, you'll also receive two "Trump 2020" ReStickers. All four will give you the opportunity to tell family, friends and neighb

ors exactly where you stand. Your support today will help launch the national FIGHT THE COUP campaign next week. Click here to receive your ReStickers in appreciation for your contribution to help Grassfire amplify your voice in this fight.

+ + We CANNOT Sit By Silently While Trump Is Impeached!

Today's House vote authorizing the Democrats' impeachment-inquiry Witch Hunt poses an imminent and existential threat to the President and his "Keeping America Great" agenda. It also opens the door to future attacks on anyone who supports the idea of "America First."

PLEASE, DO NOT UNDERESTIMATE THE RAMIFICATIONS OF THE HOUSE IMPEACHING OUR COMMANDER-IN-CHIEF AND WHERE THAT COULD END UP. BASED ON THE GROWING LIST OF "GOP WAFFLERS" GRASSFIRE HAS IDENTIFIED, THE REAL POSSIBILITY EXISTS THAT PRESIDENT TRUMP COULD BE REMOVED FROM OFFICE BEFORE THE 2020 ELECTION.

Let's be clear: Anti-Trump activists are pouring MILLIONS into this "coup" by any means possible. We don't need millions to fight back. But like David gathered "five smooth stones," Grassfire is asking 100 friends to stand with us TODAY -- the final day of October -- to get FIGHT THE COUP up and running.

We CANNOT sit by silently while Democrats impeach President Trump and nullify the votes of millions of Americans. If we do, then we'll have no one but ourselves to blame when they succeed. Please take action. Help us launch this FIGHT THE COUP campaign with your contribution now.

P.S. House Speaker Nancy Pelosi (D-CA) and her Dem colleagues are trying to overthrow the results of a free and fair election. They proved it with their vote today! But conservative, grassroots patriots CAN push back. Please help Grassfire launch a dedicated FIGHT THE COUP campaign by NEXT TUESDAY (exactly 52 weeks from Election Day), so we can build a nationwide coalition to stop the Left's impeachment-inquiry Witch Hunt. You can support this Grassfire-led initiative -- and become an inaugural member of the FIGHT THE COUP! coalition -- by contributing ANY AMOUNT now. Go here to help FUND THE FIGHT: