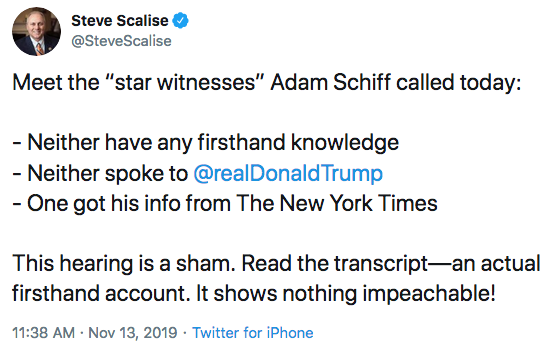 The "Schiff Sham" was on full display in our nation's capital today. The impeachment-inquiry Witch Hunt against President Trump finally emerged from the shadows this morning. Not surprisingly, the public hearing by the House Intelligence Committee revealed the totally baseless and bitterly partisan attempts to remove America's duly elected president from office.

Committee Chairman Adam Schiff (D-CA) called William Taylor, the top U.S. diplomat in Ukraine, and Deputy Assistant Secretary of State George Kent to testify in Day 1 of his impeachment hearings. Neither man heard the original phone call Mr. Trump had with Ukraine's then-president elect and testified, mostly, about what they had learned from others. One of the most vocal GOP critics of the Democrats' impeachment efforts, House Republican Whip Steve Scalise of Louisiana, pounced on that fact via Twitter:

This hearing is a sham. Read the transcript—an actual firsthand account. It shows nothing impeachable!

Many other House Republicans also are attacking the "Schiff Sham," including the Intelligence Committee's Ranking Member Devin Nunes (R-CA). He also called the impeachment-inquiry Witch Hunt a "sham" and a "low-rent Ukrainian sequel" to the "Russia hoax."

Of course, President Trump railed against the impending impeachment hearing on Twitter. He urged Americans to "READ THE TRANSCRIPT!" of the July phone call that started this second Witch Hunt against him.

It's hard to argue against today's impeachment hearing being the sham that Republicans say it is. Democrats have been trying to remove the President from office since he was inaugurated nearly three years ago. Conservative, Trump-supporting Americans have been forced to watch this attempted coup unfold day after day, month after month, year after year.

Grassfire has done our best to give you the opportunity to push back against radical Democrats, the Deep State, the D.C. Swamp and NeverTrump Republicans constantly trying to overthrow the results of a free and fair presidential election. But TODAY, we have a new way that you can make your voice heard!

Schiff dropped a bombshell of his own today, when he said during the hearing, "I do not know the identity of the whistleblower." Five weeks ago, The Washington Post "Fact Checker" gave the California Democrat "Four Pinocchios" for falsely claiming that his office had "not spoken directly with the whistleblower." Now, he expects the American people to believe he doesn't know the person's name?

House Speaker Nancy Pelosi (D-CA), Schiff and their fellow far-left Democrats have launched a coup against America's president and are rushing toward impeachment. Their goal is to kill Mr. Trump's chances of winning a second term. But if the Left wants a different commander-in-chief, they can try to elect a new one in less than a year.

Grassfire feels so strongly about the need for our team members to take action, that we're giving you an unprecedented opportunity to reach into the halls of Congress and FIGHT THE COUP! against President Trump. "Level 1" of our updated FaxFire is being offered to our team members at a 40% discount. "Level 2" and "Level 3" empower you to contact additional key lawmakers at an even greater discount (45% and 50% off!). Click here or on the banner below to instantly send your "I SAY NO ON IMPEACHMENT" faxes now:

The Democrats' impeachment investigation is a baseless, partisan Witch Hunt that is very likely to die in the U.S. Senate and only serve to further divide the American people. Overthrowing the results of a free and fair election in an attempted coup isn't right and it WON'T work. Tell lawmakers to "Stop the Schiff Sham!" by clicking here now. (To see a list of fax targets and their contact information, go here.)

Thanks, in advance, for taking a stand today.

P.S. As one of the nation's largest networks of patriotic, grassroots conservatives, Grassfire wants to give you a voice in stopping the bogus, unfounded and destructive impeachment-inquiry Witch Hunt against President Trump. If you want to FIGHT THE COUP!, take action now! Grassfire launched an entire website last week dedicated to the national FIGHT THE COUP! effort. It contains breaking news and action items for the FIGHT THE COUP COALITION:

Go here for the current list of GOP WAFFLERS who may side with Dems on impeachment.