Grassfire wants to make sure you saw the news that broke yesterday regarding the impeachment-inquiry Witch Hunt against President Trump. It's one of the most outrageous pieces of evidence yet that Democrats, the Deep State, the D.C. Swamp AND NeverTrump Republicans are waging a coup against America's Commander-in-Chief! They have been since Mr. Trump took office -- and now we have undeniable proof!

Mark Zaid, the attorney for the so-called Ukraine-call "whistleblower," announced on Twitter in 2017 -- just 10 days after the President's inauguration -- that the "#coup has started." Here's a screen capture of the weet that's still posted: 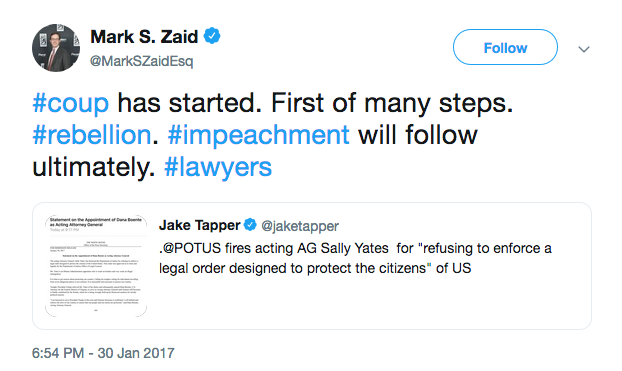 Here's a close-up of the time and date of that tweet:

For months, Grassfire has been telling you this impeachment-inquiry Witch Hunt is a COUP. We've been warning you that enemies of our nation are so hell-bent on bringing down President Trump that they're willing to do ANYTHING to stop his "Make America Great Again" agenda.

In our offices, Grassfire staff members often talk about a "Trump as superhero" effect on conservatives. The President is so skilled at pushing back against the hate from the Left that many of our team members and other grassroots patriots think he doesn't need our help. But that's simply NOT TRUE!

Radical Democrats, the Deep State, the D.C. Swamp and NeverTrump Republicans MUST hear from you! Tell them to STOP the attempted COUP against the duly elected President of the United States of America! Click or on the banner below to join the national, grassroots FIGHT THE COUP! COALITION:

Zaid, who founded the anti-Trump, nonprofit "Whistleblower Aid" in 2017, also tweeted: "It's very scary. We will get rid of [Trump]." He also remarked, "I predict @CNN will play a key role in @realdDonaldTrump not finishing out his full term as president." It has also become clear that the alleged whistleblower is a Obama-Clinton, Deep-State Insider. According to Breitbart:

[The alleged whistleblower] interfaced about Ukraine with individuals who played key roles in facilitating the infamous anti-Trump dossier produced by Fusion GPS and reportedly financed by Hillary Clinton’s presidential campaign and the Democratic National Committee.

This is OUTRAGEOUS. And it's time for citizens to stand up and FIGHT THE COUP! But YOU have to fight. Again, President Trump CANNOT do this alone -- and he shouldn't have to! Click here or on the banner below to join the FIGHT THE COUP! COALITION now:

First, the whistleblower's attorney announced nearly three years ago that the "coup has started." Now, new information indicates that the alleged whistleblower is a D.C. Swamp insider. As one of the nation's largest networks of patriotic, grassroots conservatives, Grassfire wants to give you a voice in stopping the bogus, unfounded and destructive impeachment-inquiry Witch Hunt against President Trump. If you want to FIGHT THE COUP!, take action now!

P.S. This week, Grassfire launched an entire website dedicated to the national FIGHT THE COUP! effort. This state-of-the-art networking website contains breaking news and action items for the FIGHT THE COUP COALITION:

Go here to fax 46 "vulnerable" House Democrats and demand they stop the COUP.

Go here to fax GOP WAFFLERS who may side with Dems on impeachment.